The Best Train Rides Around the World 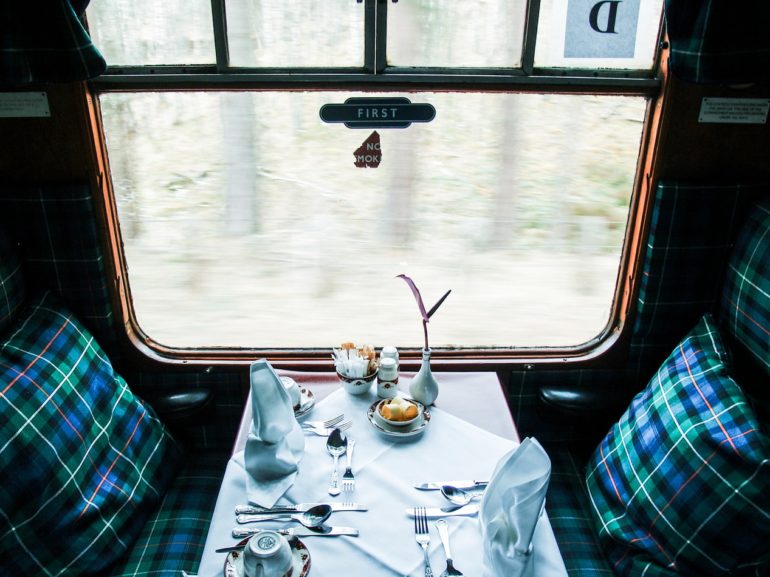 Have you been thinking about the best train vacations lately?

See, when making a traveling arrangement, we often use flights or cars. We usually jump on the internet and look for flight deals or check if we can rent a car and drive to our destination and sometimes we check if we can catch a bus. But there is one type of transportation that we don’t pay attention to, which is trains!

There are many people who have not to catch a train due to different reasons. Some people think the train takes too long to get to its destination.

Some people live where there are no railway stations. One thing I know for sure is,  taking a trip by train is a great way to get an intimate view of a place.

Railways usually pass where roads cannot pass. Trains can take you over bridges, along the base of the mountains, or next to the ocean without being distracted with traffic jams, etc.

Are you wondering what are the best train rides in the world? There are a lot of them, but depending on your liking you might find one is better than the other one.

All in all, many of the train trips will provide you with breathtaking views, scenery, and cultural landmarks. After doing some little research, we were able to find the best train rides in the world.

Some of these rides can take a day and some can take more than two days.  But one thing is certain, you will enjoy the ride.

The Trans-Siberian railway is the world’s longest train ride at 6,850 miles. Its route starts from Moscow, the capital of Russia to the city of  Vladivostok, a Russian city that borders China and North Korea.

In other words, we can say the route starts from the western end of Russia to its eastern coast. This is a fascinating trip that will make you cross 2 continents and 8 timezones.

Trans-Siberian route crosses over the Ural Mountains and through the Siberian forest.  This eight days trip takes you to different landmarks including the magnificent 3227-foot-long bridge that crosses the River Ob at Novosibirsk, the Kremlin Fortress in Kazan, and the breathtaking blue waters of Lake Baikal. Lake Baikal is the world’s largest freshwater lake by volume.

TranzAlpine is one of the world’s great train journeys for scenery. The train operates on the South Island of New Zealand and gives you the most dramatic landscape.

This train trip is 139 miles one-way and takes almost five hours. There are 16 tunnels and four viaducts, with the Staircase Viaduct being 75  246 ft high.  The trip starts in Christchurch and ends in Greymouth.

The TranzAlpine travels northwest through the fertile fields of the Canterbury Plains alongside the Waimakariri River. Then it goes up into the mountains, where it crosses the mighty Staircase Viaduct.

While on the trip you will be able to see the snow-capped mountains of Arthur’s Pass National Park and pass through the west coast’s subtropical rainforests.

When you reach  Greymouth which is the destination,  you will be able to explore this historic former gold mining town. 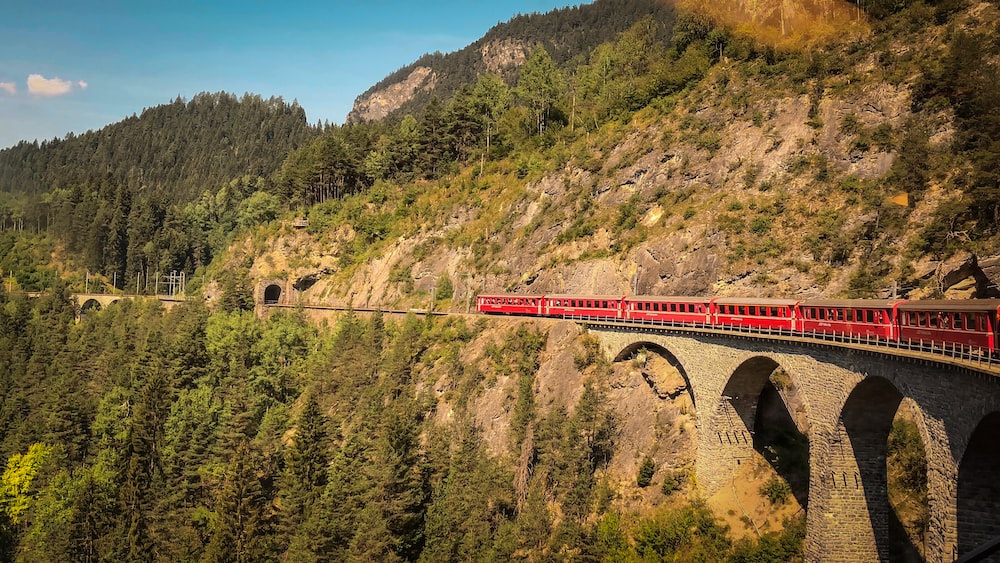 The Glacier Express train connects railway stations of the two major mountain resorts of Zermatt and St. Moritz via Andermatt in the central Swiss Alps.

The term “express” does not mean it’s a high-speed train, actually, the Glacier Express is known as the slowest express train in the world.  A trip with the  Glacier is the most relaxing way to enjoy the stunning scenery of the Swiss Alps.

Starting from Zermatt, this day-long trip covers a staggering 91 tunnels and 291 bridges as it rolls past southern Switzerland’s alpine meadows, pristine mountain lakes, and picture-perfect hamlets.

While on this trip you will reach  Oberalp Pass, the highest point on the ride at 6706 feet. Also, you can see the famous Landwasser Viaduct, a magnificent six-arch structure standing 200 feet and plunging into a tunnel cut straight into the mountainside.

The Rovos rail’s Namibia safari is a train ride to die for. This luxury train safari starts at the Capital Park Station in Pretoria and travels via the historically interesting town of Kimberley, the home to the Big Hole and the site of one of the World’s greatest diamond rushes.

The trip takes 9 days and it is 2112 miles long. In this trip, you will be able to see the open lands of South Africa’s Highveld, to the cool Atlantic Ocean in Namibia. You will come across the arid yet starkly beautiful Northern Cape and on to the border post of Ariamsvlei, which takes you into Namibia.

Enjoy an excursion to the famed Fish River Canyon the second only in size to the Grand Canyon. The train then continues to the north, through the edge of the Kalahari, to Namibia’s capital, Windhoek. Here you get the chance to go on a short tour of this small, yet charming city, with its German colonial history. 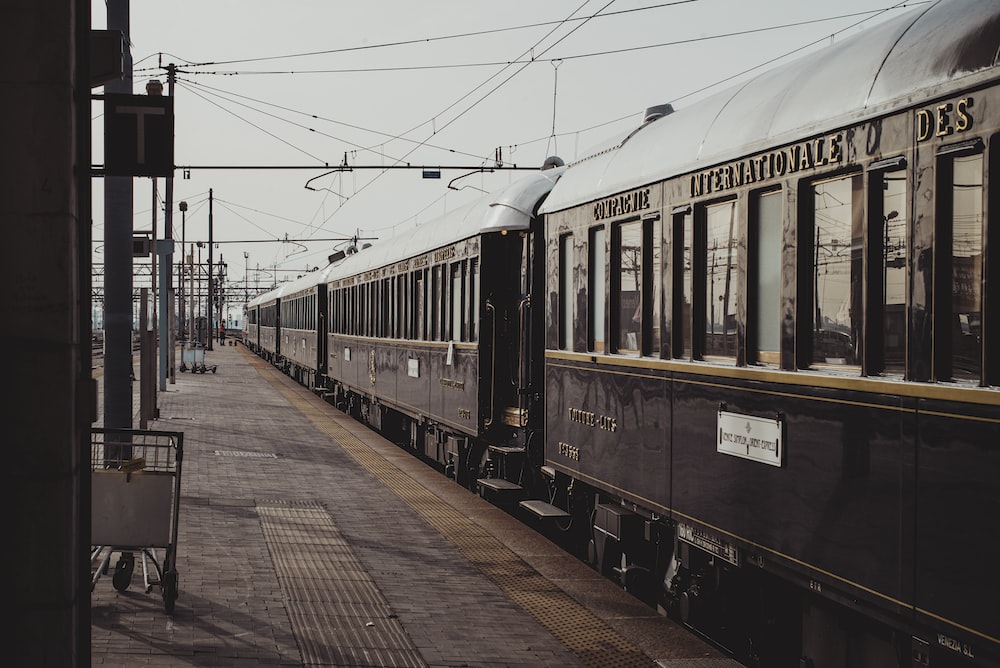 The Venice Simplon-Orient-Express is a privately-run train. The train has a 24 hours long trip from  Venice, Italy to  London, UK. The trip passes through other European cities such as Paris, France, and  Verona, Italy, and runs roughly once a week from March to November.

While on this trip you will enjoy the wonderful and amazing scenery of Italy, This journey on Venice Simplon-Orient Express travels north from Verona, up through Lichtenstein, Austria, Germany, France and then to England. 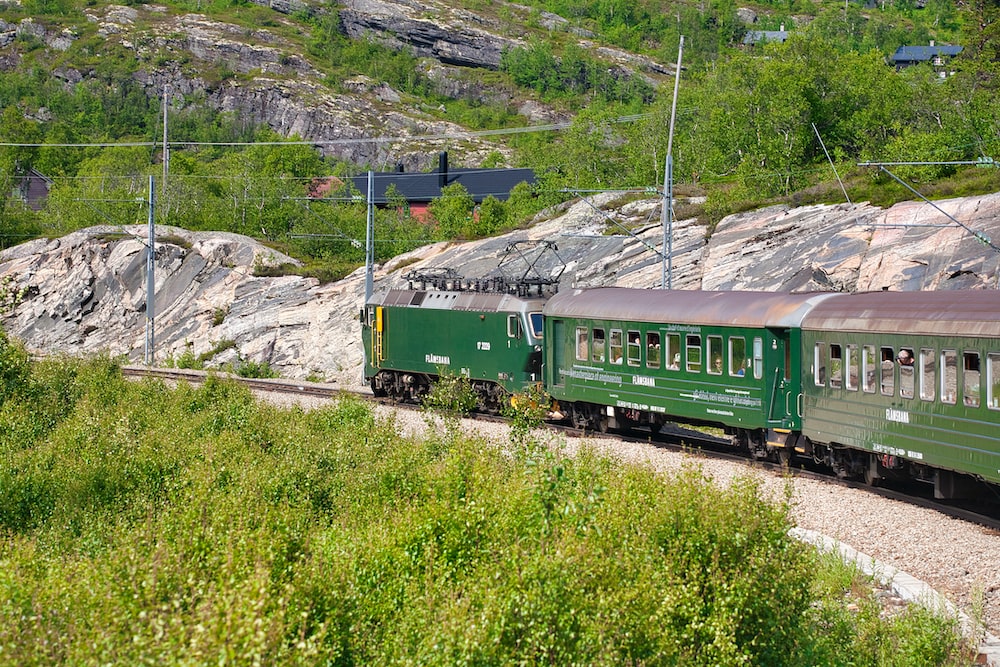 The Flåm Railway is one of the most beautiful train rides in the world, one of the leading tourist attractions in Norway and one of Europe’s steepest rail routes.

The train runs from the end of Aurlandsfjord, a tributary of the Sognefjord, up to the high mountains at Myrdal station. The trip shows the finest aspects of the stunning scenery of Western Norway.

This is an hour-long trip, the railway rises 2831 feet from its starting point in the tiny village of Flåm in the Sognefjord.

While you are on this trip you will pass by deep ravines, cascading waterfalls, and towering peaks to the mountaintop station of Myrdal.

The Flåm Railway is gorgeous in the summertime but it’s magical during wintertime when a blanket of snow turns the trip into a winter wonderland.

With this trip you will cross an incredible eight countries, the Golden Eagle Danube Express is the best way to see Europe in style and includes stops in some of the continent’s most beautiful cities.

The train starts in Istanbul and travels north via the Carpathian Mountains and into Transylvania, past Bran Castle also known as ‘Dracula’s Castle’. Continues travels through Hungary, Slovakia, Austria, and Poland before arriving in beautiful Prague.

The Ghan trip starts from   Adelaide to Darwin a total distance of almost 1851 miles. The trip takes 54 hours and has a four-hour stopover in Alice Springs.

The Ghan offers travelers the opportunity to experience the vast landscape in pure luxury, it passes directly through Australia’s fiery red center.

In this trip, you will see the tropical coast of the Northern Territory via the red-hued rocks of the MacDonnell Ranges and onto the fertile plains of South Australia.

A trip on The Ghan also features off-train excursions, including a leisurely boat tour of Nitmiluk Gorge and a trip to the quirky desert town of Alice Springs.

If you want adventure in the Canadian Rockies this train will give you just that.  This trip takes you to stunning mountain towns with stays in Banff and Lake Louise.

The train trips start in Vancouver and end in  Banff, covering the beautiful scenery of southern British Columbia. The  Rocky Mountaineer’s First Passage to the West is one of the most scenic train rides in the world.

While on the trip you will be able to see breathtaking sights such as the wild waters of Fraser Canyon’s Hell’s Gate and steep tracks running alongside the Thompson River on top of that enjoying the comfort of luxurious carriages.

You will stay overnight in the lakeside city of Kamloops before they rise over the stunning, snow-capped peaks of the Canadian Rockies and arrive at beautiful Banff.

The West Highland Line starts from Glasgow to Fort William, the largest town in the West Highlands of Scotland, and onwards to Mallaig, a tiny fishing port and terminal for the ferry to Armadale on the Isle of Skye.

This train is an excellent way to experience the country’s wild, western coast. The West Highland line takes you through  Scotland’s most diverse scenery.

The urban landscape quickly succumbs to verdant glens and tranquil lochs once the train leaves  Glasgow.  The train will pass through the remote wilderness of Rannoch Moor before skirting the towering Ben Nevis and touching down in Fort William.

If you are a Harry Potter fan you will like this trip more because while you are on, it switches direction and moves westward, and passes along the Glenfinnan Viaduct that featured in the Harry Potter film series. Then after that, it will arrive in  Mallaig.

Belmond Hiram Bingham is a luxury train operating day return trip from  Cuzco to  Machu Picchu, Peru. The train travels through some of Peru’s most romantic scenery and ends at the amazing  Machu Picchu and is a once-in-a-lifetime luxury train trip.

The Belmond Hiram Bingham crosses over the Sacred Valley of the Incas, a stunning valley formed by the winding Urubamba River. It also passes through the tiny village of Ollantaytambo.

The best part of this trip it’s where it ends, Machu Picchu. Machu Picchu is a famous landmark, an ancient Inca citadel and UNESCO World Heritage Site set high in the Andes Mountains.

15 Secluded Beaches In The U.S

Advantages of Using a Travel Agent for Luxury Travel